Tensions between the United States-led North Atlantic Treaty Organisation (NATO), the European Union, and Russia have been increasing with a serious risk of war in Ukraine. ​​

The conflict in Ukraine is not new. It is the outcome of an ongoing, decades-long process of NATO expansion. In the early 1990s, the US administration of George HW Bush made repeated assurances that, following the collapse of the Soviet Union, Washington would not seek to extend NATO into Eastern Europe, Central Asia, or the Caucasus.

“We understand that not only for the Soviet Union but for other European countries as well it is important to have guarantees,” then-US Secretary of State James Baker told Mikhail Gorbachev in 1990. “If the United States keeps its presence in Germany within the framework of NATO, not an inch of NATO’s present military jurisdiction will spread in an eastern direction.”

However, since that time, 14 countries have been added to NATO’s membership list, most of them in Eastern Europe. This policy has clearly been provocative, being recognized as such even within “mainstream” US foreign policy circles. As George Kennan, the original architect of US foreign policy in the Cold War, noted: “expanding NATO would be the most fateful error in American policy in the entire post-Cold War era.” 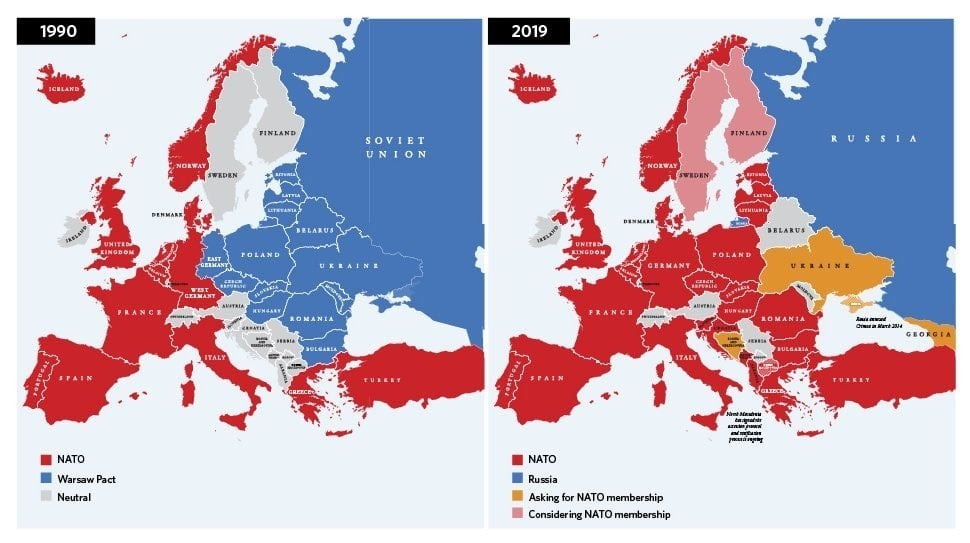 Ukraine holds a particular geostrategic importance, given that it shares a 2,000 kilometre border with Russia. In recent years, US aggression and interference have served to turn Ukraine into a major flashpoint of the new Cold War. In 2019, the US unilaterally withdrew from the Intermediate-Range Nuclear Forces Treaty of 1987, increasing the likelihood of an arms race.

The conflict in Ukraine also has an economic component. In addition to the US and EU economic sanctions against Russia, the US is threatening to expel Russian financial institutions from the international payment platform SWIFT and to block the operation of the already constructed Nord Stream 2 gas pipeline running from Russia to Germany.

In addition to these state-to-state tensions, within Ukraine, well-armed, explicitly fascist organisations have received official endorsement and recognition within the territory controlled by the Kyiv administration – posing a direct threat to the Russian-speaking population living in the east of the country.

Ukraine’s entry into NATO would mean the stationing of missiles, potentially with nuclear arms, only a few minutes flight time from Moscow. It is important to remember, that it was precisely this type of threat that the US would not accept and was prepared to risk world war for during the Cuban Missile Crisis.

The Russian government has made two clear proposals to resolve the crisis: first, that Ukraine never become a member of NATO; and second, that nuclear or advanced conventional weapons never be deployed in Ukraine. To date, the US has rejected these proposals, claiming that the issue at stake is Ukraine’s sovereign right to freely decide its own military alliances. Again, this is pure hypocrisy, as the US refused to accept this argument during the Cuban Missile Crisis. Is there any doubt about how the US would react if a country on its borders joined a military alliance which included Russia or China?

The cause of the crisis around Ukraine is not Russia but the policy of the US. It is evident the US has been putting pressure on a number of European members of NATO to join in these dangerous actions.

The only solution to this dangerous situation is for all sides to adopt a clear position that Ukraine will not become a member of NATO. This can become a starting point for further discussions to de-escalate the situation in the region. If the US and NATO do not cease their aggressive actions, the world will continue to face a very serious threat to peace.

Sign the No Cold War pledge and stand up for peace and cooperation.